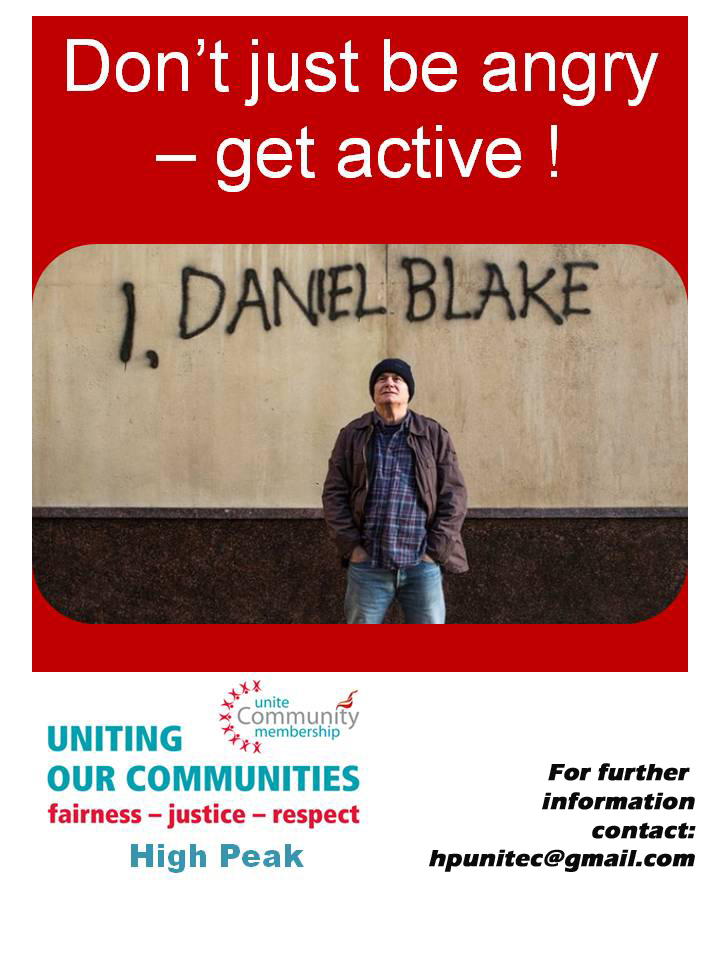 “No to Sanctions” is a key campaign for both Unite the Union and especially  Unite Community.

Many of the founder members of the High Peak Unite Community were inspired by the Tameside Against the Cuts Campaign that started when Universal Credit was first piloted in Ashton nearly three years ago.  An insight into what it has been like in Ashton can be found from the Blog written by Charlotte Hughes who coordinated this campaign.

We have supported all the national days of action called by Unite and there will be a further day of action on Thursday 30 March where members will be in Glossop raising awareness of the issues. 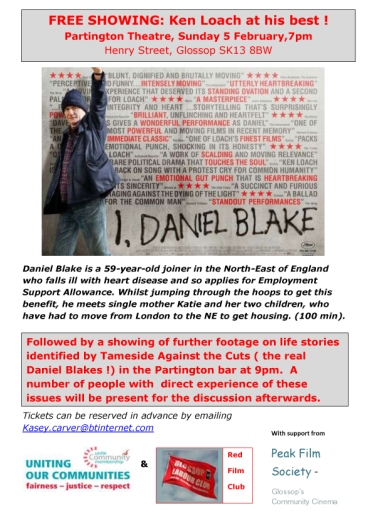 A major opportunity to raise awareness of the issues around the benefit reforms came with the release of Ken Loache’s film “I Daniel Blake”.

With sponsorship from the East Midlands Unite Community and Unite the Union, Federal Mogul Branch together with  the support of Peak Film Society and the Red Film Club, we were able to fill the Partington Theatre, Glossop for a free showing on the 5 February.  There was a further free showing, to take the over flow,  at Glossop Labour Club on 1 March.

Attendance at this showings included a number of people who had direct experience of the issues raised, either from receiving benefits or from working in an advice or support capacity.  The feedback was that the film, frequently criticised for just being a story, did,  if anything,  underplay the distress that was caused by the benefit reforms.  A number of people came forward who wanted to do something about it and High Peak Unite Community are currently exploring a number of options:

Drop-in Lunch for those affected by the Benefit Reforms:  The first drop in will be on Tuesday 4 April at Glossop Labour Club as a  pilot to assess interest and to hopefully find out more about the particular issues involved.  Light refreshments and a light meal will be provided.

Advocacy Support:  Discussions with professional advisers have indicated that many people, especially those with health problems, would benefit from having someone with them during critical interviews.  This is not to provide advice but to ensure that they are properly represented and understood.  A number of volunteers have expressed interest in providing this type of support. One training session has already been provided by a professional advocate and more training is planned for the near future.

Access to Computers:  Many processes are now “on-line by default” including, most recently, claims for housing benefit.  Many people are not fully confident with using a computer and many more do not have easy access to computers.  We are therefore exploring ways in which this support can be provided on a routine basis.

If anyone wants to get involved with these developments or has ideas or experience that they can share with us, please do not hesitate to get in touch – you do not need to be a member of Unite Community to get involved.

The Unite Community is an innovative development for the Trade Union movement.  As part of Unite the Union, it is designed for those who cannot be in a Union (unemployed, retired and self-employed)  to come together to progress Unite's mission within their community:

To organise people to strive for a society that places equality, dignity and respect above all else.

The Unite Community therefore brings together people who wish to campaign on issues that are important to them under a supporting trade union structure provided by Unite the Union.